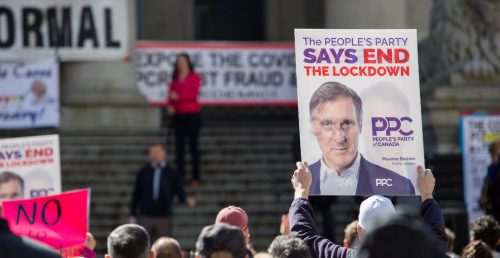 Maxime Bernier seems to thrive in making headlines for the wrong reasons, as evidenced by his recent campaign tour essentially trying to downplay the importance of being vaccinated.

In a tweet, Bernier said: “Critics say I am selfish and put vaccinated people at risk by not getting the vaccine. Are they not protected by the vaccine?

He goes on to say: “And aren’t these criticisms selfish in wanting to impose on each THEIR assessment of the risk that each should take?“

Imagine being afraid of a vaccine with literally decades of research behind it.

Anti-vaccines are no better or different from the Covid alarmists living in basements.

May the rest of us be spared their hysteria for even longer.

Bernier appears to be rallying a crowd that has been vocal since the start of the pandemic, pushing back restrictions as well as advice from health officials and scientists.

While a COVID-19 vaccine does not make it impossible for the virus to spread, it dramatically decreases the chance of getting a serious infection.

The alarmist media and the health fascists have tried to put you in such a state of panic that you will be ready to give up all your rights.

Many Twitter users criticize Bernier’s claims, but there is still a crowd supporting his anti-vaccine rhetoric.

“Half of the people in this thread have been psy-op’d,” one user said. “Don’t worry about the critics, they are MANIPULATING,” said another.

Bernier made headlines in British Columbia in June for spending time at a restaurant known to repeatedly ignore health protocols.

The power of visuals in online marketing